Overview: A transparent top contact is necessary to allow light into the solar cell layer stack.Most optically transparent and electrically conducting oxides (TCO) are binary or ternary compounds, containing one or two metallic elements. Their resistivity can be as low as 1 x 10-4 Ω-cm, and their extinction coefficient in the visible range (VIS) can be lower than 0.0001. This remarkable combination of conductivity and transparency is usually impossible in intrinsic stoichiometric oxides; however, it is achieved by producing them with a non-stoichiometric composition or by introducing appropriate dopants. The usefulness of TCO thin films depends on both their optical and electrical properties, both parameters are considered together along with environmental stability, abrasion resistance, electron work function, and compatibility with substrate and other components of a given device. The availability of the raw materials and the economics of the deposition method are also significant factors in choosing the most appropriate TCO material. The selection decision is generally made by maximizing the functionality of the TCO thin film by considering all relevant parameters, and minimizing the expenses. 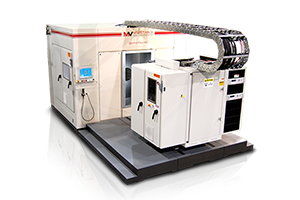 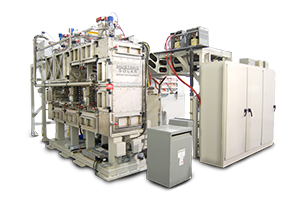 Customization of standard products or development of fully custom solutions to optimize system design for vacuum deposition onto almost any substrate.

Challenges: It is possible to take advantage of differing properties of two TCO’s to form a bilayer TCO stack. High-efficiency CIGS and CdTe devices are generally fabricated with such bilayer structures, consisting of a highly conducting layer (Top Contact) for low-resistance contact and lateral current collection and a much thinner high-resistivity layer of a suitable material (Window Layer), to minimize forward current.

The most prevalent TCO material systems are zinc oxide or indium oxide. Aluminum doped zinc oxide (ZnO:Al, AZO) or tin doped indium oxide (In2O3:Sn, ITO) are commonly used, however, other dopants and oxide combinations have been tested. Magnetron sputtering is an industrially proven, large area deposition technique that is typically used to deposit AZO or ITO. When considering a sputtering process, it is important to define your material system and also the type of deposition power. Below are some guiding principles for selecting a TCO for your production process:

There has been an ongoing debate on the value of AZO vs. ITO for solar cell applications. Both materials are used in production and selecting either material system is highly dependent on a manufacturer’s production demands and existing technology. For layer thicknesses less than 150 nm, ITO films produce superior conductivity. This means that AZO films must be thicker to achieve the similar TCO properties. In production, ITO films are 3-10 times thinner than AZO films, however, this production advantage is offset by the increased cost for ITO targets. ITO targets can cost 3-6 times that of an equivalent AZO target. Indium is somewhat rare and in high demand in the flat panel display industry, therefore the cost of indium has risen dramatically in the past 10 years. Many companies do not want to optimize their process around ITO and take the risk of higher material costs in the future. Other companies are willing to take the risk of higher material costs to ensure better environmental stability with ITO over AZO. In general both AZO and ITO can be successfully integrated into a thin film solar cell manufacturing process, but recognizing the trade-offs is important.

When selecting a deposition power mode, deposition rate, target material, film density, and production capability must all be considered. Magnetron sputtering can be used with a variety of power delivery options, specifically: DC, pulsed DC (p-DC), AC or medium frequency, and RF. The deposition rate is highest with DC sputtering and lowest with RF (Deposition rate: DC > AC > RF), however, the film density follows the inverse trend (Density: RF > AC > DC). DC power is most commonly used with metal or metal alloy targets and is not suitable for insulating targets (such as non-conducting oxides). For insulating or ceramic targets RF power is recommended.